5/14/2020
Nearly every month my classmates and I take active part in charity actions, and each event gives me an opportunity to learn about the lives of other people, to learn from their wisdom and fortitude but also to understand my own abilities.
This year we celebrated the 75th Anniversary of the Victory in the Great Patriotic War. This was a difficult time and I would like to take care of and give gratitude to the veterans for the peace we are living in! I learnt that there are only eleven veterans still alive now in the Almaty district of our city. Can you imagine, only eleven people - witnesses of the war, soldiers who fought and won the victory! Many of them are 95-97 years old.
Today I would like to tell about my acquaintance with one of the veterans.
Rzagul Baikeshev went to the front in 1941 at the age of 17, straight after school graduation. The yesterday’s student purposefully added one year to his age to be allowed to join the army and fight against fascists. Can you imagine, he was only 17 years old! A young boy, like you and me, who had so many dreams and plans! He fought in the war for four years and celebrated the ending of the war on the 8(9) of May 1945.
After that Rzagul Baikeshev spent two years in the hospital, where he was restoring his health after a serious wound in his arm (he could not move it). After the recovery, Rzagul Baikeshev started working as the head of his household.
We learnt his address, agreed to meet, and we were invited to visit him. We bought some sweets for tea (according to etiquette, you should bring something when you pay visit to a guest) and we arrived to meet our veteran. He met us in the yard of his house. There is a big golden plaque on the wall with his name written on it, but he does not pay attention to it, as according to him, the main thing is victory.  Rzagul Baikeshev looked at me with a glint in his lively eyes with youthful enthusiasm, and then ordered in a commanding voice: "Let’s go to my apartment!". At  97, Rzagul Baikeshev can use an elevator and he quickly took us to the 5th floor, ran to the apartment, took off his coat and put on his jacket – and all of a sudden we saw a young broad-shouldered soldier, proud of his motherland and of his victory!
Rzagul Baikeshev told us about his life, but he never mentioned how difficult or scary it was for him. As a defender he said: "We did everything for your happy life! Live, be happy and be healthy!" I was leaving his cosy house with a feeling that I would come back to this place again, not only on the 9th of May.
The Great Victory Holiday has passed, but we still continue to honour the memory of soldiers’ feat, who fought for our lives! Our big gratitude to the dead soldiers in the fields of fight and living veterans will be eternal and memories about the Great Patriotic war will be indelible.
We remember and honour our winners, because first of all it is important for us never to repeat the mistakes of the past. Let us remember and visit our dear veterans without any reason, let us call our relatives saying a simple word, “thank you”, as you do not need any reason for kind words!
Dear veterans, thank you for the peaceful sky! We will remember our history, we promise! 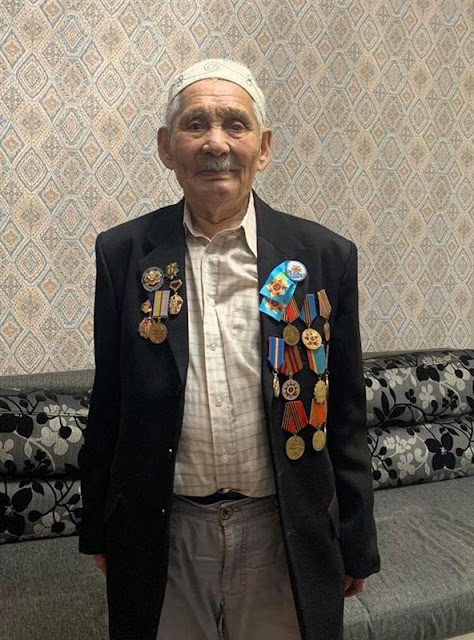